Tokugawa and the Masters

a (born in 1958) is 15th Head of Mito branch of Tokugawa Shognate Family. He is currently acting as an executive advisor to Tokio Marine and Nichido Fire Insurance Company (Tokio Marine) as well as President & Director of Tokugawa Museum in Mito city, where the last Shogun come from. He also holds various honorary roles such as, Councilor of Tokugawa Memorial Foundation, Director of Tokugawa Reimeikai Foundation, Director of Santokuan (Dainihon Tea Ceremony Society), Councilor of Yamashina Institute for Ornithology chaired by HIH Prince Akishino, Head of Metropolitan Police Department and Director of the International Education Center. His grandfather, Tokugawa Kuniyori, greatly contributed in building a modern country of Japan and took a very vital role as President of the House of Loards and President of Japan Red Cross. His grandmother is 11th daughter of Prince Tokugawa Yoshinobu who is the last Shōgun.
Narimasa Tokugawa joined Tokio Marine in 1980 fresh from Keio University, and took active roles of the company as Deputy Head of Corporate Planning Department, Head of General Affairs Department and Executive Officer of the Tokio Marine Group.
Tokugawa Shogunate era, so called “Edo era” after the old name of Tokyo, lasted for 265 years until Meiji Revolution abolishing feudal Shognate in 1868. Being strongly influenced by the culture of the neighboring China and Korea, Japan had assimilated foreign cultures and developed a unique and distinctive culture centered on the Emperors and the Shoguns. Japan could enjoy its sovereignty of Emperor under Tokugawa Shogunate regime thanks to “isolation policy” from foreign countries. Unique Edo culture was emerged and developed under this peculiar period of peace.
While there was no war with foreign countries during Edo period, the end of the “isolation policy” at the strong demands of the western super powers brought the division of the regime and caused the civil war supported by foreign powers at the end of the Edo period, with France on the side of Shogunate and Britain standing for the opposition. Thus then Shogun, Tokugawa Yoshinobu, made a decisive judgment to peacefully turn over his power to the Emperor Meiji at its head. His wisdom avoided a major military conflict in Japan and a colonization by the foreign powers. 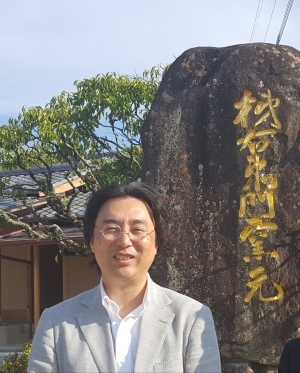 Sakaida Kakiemon was born in 1968 in Saga prefecture, western part of Kyushu Island, which is very famous for “Aritayaki” porcelain since 16th century. He studied Japanese painting at Tama Art University and started being apprenticed to his father, Sakaida Kakiemon; 14th Head of the Kakiemon Family in 1994. He has demonstrated a matured techniques and produced many masterpieces which won awards at Japan Traditional Crafts Exhibitions. He succeeded to the name of “Kakiemon” in 1994 and has continued a challenge for new works preserving a tradition with new concept and tastes.
He serves as Secretary of western branch of the Japan Traditional Crafts Association, Deputy Chairman of the Saga Prefecture Crafts Association, Visiting Professor of the Graduate School of Art at Kyushu Tech University and Visiting Professor of the Faculty of Art and Regional Design at Saga University.
Producing of ceramics became popular in Arita region after discovering white porcelain clay in Izumiyama, Arita in 1616. In 1640, Sakaida Kakiemon (first generation) invented red color on milk-white body with simple, asymmetric design and it has been called as “Kakiemon”; one of the most prestigious crafts in Japan. Kakiemon popularly credited with being one of the first in Japan to discover the secret of enamel decoration on porcelain and he had tirelessly produced new works in an attempt to challenge the new techniques for beauty quest since then. Early Kakiemon was influenced by bases popular in Chinese Ming dynasty, but Kakiemon has gradually developed and establishes its unique styles and patterns based on the traditional Japanese sense of beauty.
Kakiemon Porcelains were largely exported into Europe by The Dutch East India Company and its red color with unique design provoked a European frenzy since late 17th  century.In the beginning of 18th century, many European enamel craftsmen tried to copy Kakiemon red color and design in their own kilns. Kakiemon has greatly influenced Meissen (East Germany), Delft (western Netherlands) and Chantilly (northern France), and you still can see the European Kakiemon even in today.
Kakiemon has never stopped questing of beauty with innovative techniques for 370 years since the first generation. 15th Head of Kakiemon is very proud of demonstrating his works in Georgia.

Naoko Matsudaira was born in Hyogo prefecture in 1944 and currently serves as one of the masters at “Ura Senke” school of Japanese tea ceremony. She married Hidehisa Matsudaira who is the 13th Head of Matsudaira clan, one of the oldest Japanese Samurai clan and also the influential branch of Tokugawa Mito family.
The Japanese tea ceremony is a traditional form of serving powdered green tea. The traditional tea service in ritual fashion was originally introduced from China in the 11-12th century and gradually spread and expanded among Buddhist institutions, samurai warriors and rich merchant classes. It reached a new level of sophistication under the tea master “Sen no Rikyu” in 16th Century.
In inviting guests to a tea ceremony, the host always takes utmost care in preparation of the tea room, adjacent garden, tea utensils and provision of simple dishes or cakes in the room. The famous idiom “Ichi-go Ichi-e” is derived from the spirit of tea ceremonies, describing the cultural concept of treasuring meetings with people in a “for this time only”, “never happened again” or “one chance in lifetime” way.
The tea ceremony is distinguished from other art forms in that it has taken a simple everyday activity (tea drinking) and elevated it to the level of an art embodying the beauty of form.
Ura Senke is one of the branches of “Sen no Rikyu” and currently holds the largest school for tea ceremony in Japan. 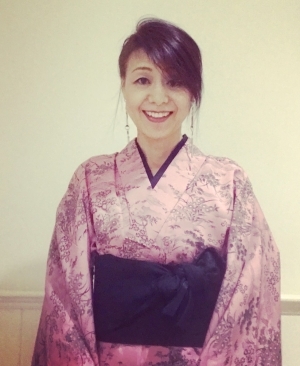 Akemi was born in Mito,Yamaguchi Prefecture. She embarked on her journey as a calligrapher at the age of 8, when her mother sent her to Calligraphy school to improve her writing, which had been compromised from losing sight in her left eye. Here, she was taught under Master Seizan Fujimoto, whose lineage is traced back to a well-known calligrapher of the Meiji period, Meikaku Kusakabe. At the age of 16, she started learning the style of Mr Goseki Nishiwaki through the Bunka Calligraphy association in Tokyo, over time, learning diverse styles of calligraphy used by other well-known calligraphers.
At the age of 24, Akemi was qualified as a calligraphy teacher and given the name “Koshu” by her Master Seizan. The following year after her return from the UK where she had studied English, she set up her own school to teach Calligraphy and English. During this time, she held her first solo exhibition in Japan and continued to learn sumi painting, seal making, scroll making, and gain qualifications in certificate-form writing and pen writing. With this extensive training, she developed her unique method of writing, the “Hakufu technique” (3D writing), guiding the viewer through her journey of life, each stroke with a soul of its own. She followed Seizan till his last breath, standing by his message, to never neglect the beginner’s mind.
In 2001, Akemi moved to the UK to re-start her calligraphy courses in the UK as “Koshu Japanese Art”. As a teacher, she focuses on bringing out the individuality of each student through their art. She is currently instructing a number of students through the grading of Bunka Calligraphy Association in Tokyo, with 7 students qualified as Calligraphy teachers, and 5 Dan holders in both brush and pen calligraphy. Since, she has held several student exhibitions to demonstrate their work.
Koshu gained international recognition as a Japanese artist through her solo exhibition in 2013, held in London, which coincided with the publication of her art book “Love and Dream”. With this, she has been running numerous workshops in calligraphy, sumi painting and seal making. In July 2015 and 2016, she was invited to exhibit her artwork and carry out demonstrations at an art event “Art in Action” in Oxford. In October 2016, she was invited to hold a solo exhibition as a part of 110 years’ anniversary event of the former British Consulate in Japan, receiving recognition as a Japanese artist in the UK. This exhibition was titled, “the heart of the flower” after one of her signature artworks portraying the life of a Lotus flower. Through this exhibition, Koshu made many appearances on Japanese TV, strongly connecting her to the origin of her calligraphy. From September to December 2017, Koshu’s artwork was exhibited at the Calligraphers in Conversation at the San Francisco Public Library, where she also held demonstrations. This year, she was invited to demonstrate her work at the Hanami Festival in Kent, a team-building seminar for a Japanese Pharmaceuticals in Berkshire, Cowden Japanese Garden in Scotland, and the Will Adams festival in Kent. Koshu also undertakes commissioned works, the most recent of which is the label of a newly launched craft gin, Kokoro, which received a Gold Award in Design in 2018.